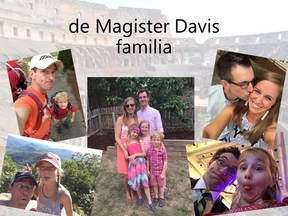 Jeff Davis began leading the Latin program at Cambridge High School in 2017. His love for the Latin language and Roman culture began in high school when he was first able to study the language. His aptitude and passion for Latin became clear when he earned a perfect score on the National Latin Exam and placed first in grammar at the AL state Latin convention in his first year. He would later become the twice-elected president of his school's Junior Classical League and the chaplain of the AL JCL. With only three years' time for his HS Latin studies, his magistra urged him to skip level three and proceed straight to AP Latin, where he could study the beauty and intricacies of Vergil's poetry.

Mr. Davis went on to study Psychology at Samford University in Birmingham, AL, where he also minored in Latin, reading Ovid, Cicero, Horace, and Vergil. His first job after college was as a Latin teacher at St. David's School in Raleigh, NC, where he became the seventh grade chair and was also the golf coach and chapel band leader. Moreover, in his fourth year he was awarded the Excellence in Teaching award. After five years there, he focused his pursuits toward the church. Mr. Davis subsequently went to seminary at Reformed Theological Seminary here in Atlanta, where he earned a Master of Divinity. Concurrently he led the youth ministry at Roswell Presbyterian Church. Upon graduating seminary, Mr. Davis was ordained as a minister in the Presbyterian Church (USA) and served as Associate Pastor and then Pastor of Hamilton Mill Presbyterian Church in Gwinnett County.  Still he missed the daily rhythm of school life and being around students on a regular basis (the pastorate can be quite solitary). And so he decided it was time to get back into teaching. In addition to teaching all levels of Latin at Cambridge, Mr. Davis also teaches the SAT Prep class, helping students master content and strategies for success.  Additionally, he is the Head Coach for the Girls Golf Team.
​
Mr. Davis married his wife Amelia in 2001, and they have five children, Georgia, Bentley, Watson, Ennie and Jonas. He enjoys hiking, golfing, reading, playing with his kids, sitting around a fire, doing anything outside, and a sipping a cup of earl grey.

In spring of 2022, Mr. Davis was chosen as Cambridge High School's Teacher of the Year.